We all know Donald Trump as the man with a big wallet, not to mention ego. Over the past year, Donald Trump has released some statements that have left the world speechless. Trump has been in the spotlight for quite awhile now as he leads the Republicans in the 2016 presidential election. The GOP presidential candidate pivots between sexist commentary and divisive racism without thinking twice, leaving the world in shock. The Spectrum staff has gathered 10 of Donald Trump’s craziest moments.

10. “Build a wall with a big beautiful door for legal immigration.” —GOP Debate, August 2015. This comment inspired the worldwide trending hashtag #BigBeautifulDoor. The big beautiful door sounds a lot like a Disney movie, perhaps Monsters Inc? I mean where else have you seen a big, mysteriously beautiful door in the middle of nowhere? 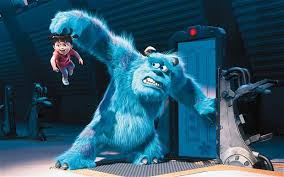 9.”Our leaders are stupid, our politicians are stupid, and the Mexican government is much sharper, much more cunning. [So] they send the bad ones over because they don’t want to pay for them, they don’t want to take care of them.” —GOP debate, August 2015. Did Trump forget that he is a leader and politician in the United States of America? It seems as though he was tweeting himself in real life…

8.”When Mexico sends its people, they’re not sending their best. They’re sending people that have lots of problems, and they’re bringing those problems to us. They’re bringing drugs. They’re bringing crime. They’re rapists. And some, I assume, are good people.” — Trump’s presidential campaign announcement. There is  much wrong with this statement, categorizing most Mexicans that come to America as criminals and rapist is very biased, It’s like saying all Muslims are terrorist and all white boys are school shooters, It’s untrue and very wrong.

7. “Laziness is a trait in blacks”- Donald Trump To every Black American. Trump stated that this is his favorite sentence to tell “The Blacks” I hope Trump knows that African Americans make up 13.2% of America.

6.”NBC News just called it ‘The Great Freeze’ — coldest weather in years. Is our country still spending money on the GLOBAL WARMING HOAX?” — Twitter, 2014. Yes Donald.. Just like how the republican population is believing the Hoax that you “Will make America great again”.

5.”If I were running The View, I’d fire Rosie. I mean, I’d look her right in that fat, ugly face of hers, I’d say, ‘Rosie, you’re fired.’ We’re all a little chubby, but Rosie’s just worse than most of us.” — Entertainment Tonight, 2006. Not sure if Donald Trump has actually seen Rosie O’donnell, because his statement is completely inaccurate..

2.”Robert Pattinson should not take back Kristen Stewart. She cheated on him like a dog, and will do it again — just watch. He can do much better!” — Twitter, 2012. Just like your three previous wives could do better….

1.”Sorry losers and haters, but my IQ is one of the highest — and you all know it! Please don’t feel so stupid or insecure; it’s not your fault.” — Twitter, 2013 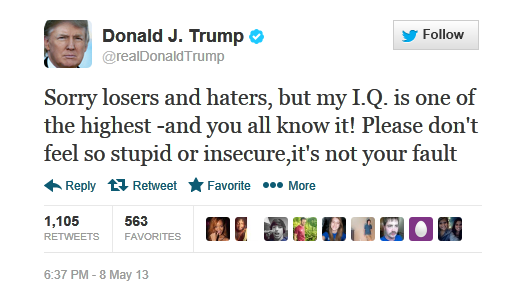